In an earlier post, I wrote about my struggles to find a monitor setup that satisfies my quite modest requirements, as well as my initial encounter with the Dell U4021QW. Towards the end of the post I shared that I had some issues with the monitor but that I was in contact with Dell support and was hoping to be able to resolve the issues.

My initial email to Dell was sent on the 27th of January (2022-01-27) and today, almost two weeks later, we have reached the end of our troubleshooting.

The monitor has a USB-hub and is meant to have KVM-switch functionality. This is great, because I have three computers that I rotate between:

So, following Dell’s manual, my intention is to have the “Super Speed USB 3.2 Gen1 A to B upstream cable” and a DisplayPort cable permanently plugged into my desktop machine and then use the Thunderbolt 4 cable for whichever laptop I want to use1. All my peripherals (keyboard, webcam, mouse dongle and microphone dongle) are then plugged into the monitor and should work with all computers.

When I wrote my previous post, the USB-hub functionality did not work, with any of the computers listed above. Devices connected to the hub would stutter or stop functioning altogether after anywhere from seconds to minutes.

BTW, I’m on my third monitor

Firstly, Dell sent me a replacement monitor with no fuzz! They even over-nighted it to my apartment. Great service!

Unfortunately, it arrived in quite bad shape… 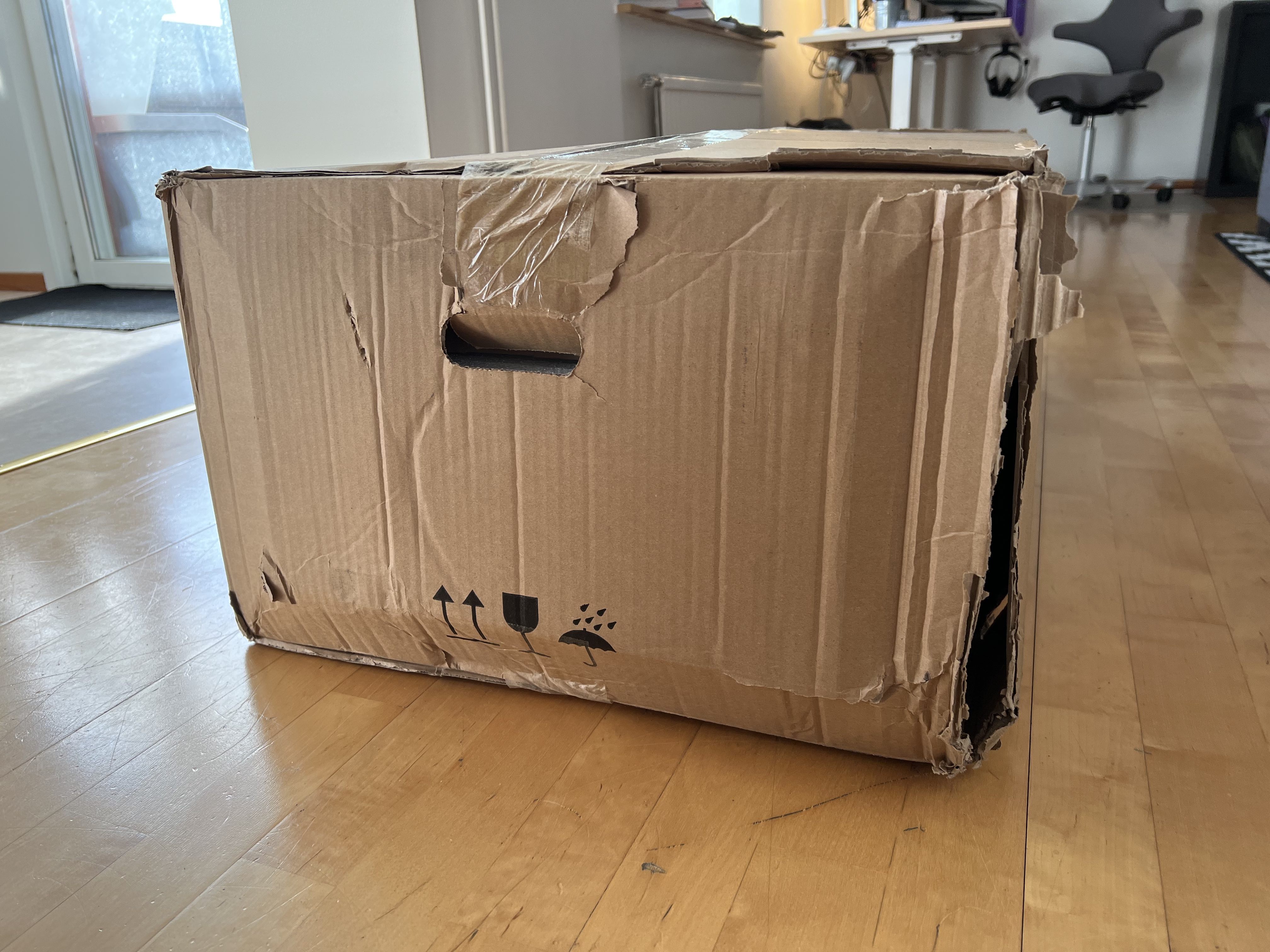 It went back to Dell the day after… but they did send me a third monitor that arrived a couple of days later.

Conclusion 1: The monitor works with Windows

After a lot of additional troubleshooting, I got a driver sent to me over email – which I think was the A00-00 USB-C Monitor Driver that you can find on Dell’s Support Page, but Dell did not confirm this – and after installing said driver the monitor works (pretty much) flawlessly with my HP Windows 10 laptop. I do experience the occasional stutter, but it might as well just be the mouse acting up.

Conclusion 2: The monitor does not work with Ubuntu

There is no equivalent driver (kernel patch?) for Ubuntu, even though Dell say they officially support Ubuntu both in their documentation (take a look at the drop down menu over on Dell’s Support Page again) and in their emails to me.

After asking me to test a number of combinations of cables and configurations they eventually told me:

It sounds like it’s related to drivers, or maybe it’s something in BIOS that is acting up…

As I have already pointed out, Dell does not list any “drivers” for Ubuntu on their support page, so I highly doubt the non-existent driver is at fault. I did check my BIOS settings and there are USB related settings in there, but they are all set to values that seem reasonable (more permissive than not).

Conclusion 3: The monitor does not work with MacBook Pro (M1 Pro)

This is probably the most frustrating issue, because I found this reddit post and OP claims to have two U4021QW working fine. Additionally, since Dell has the USB-C with a Mac article mentioned in the footnote earlier, it makes me so annoyed that I cannot get the monitor to work for me.

I got even more annoyed when I received the following from Dell’s support:

I consulted with higher tier support that confirmed that both Linux and MacOS based systems must use Video + Upstream cable for full functionality.

I want to call BS, because this is mentioned absolutely nowhere in Dell’s official documentation… Neither does it make any sense, since Dell claims other Dell monitors work with Thunderbolt and I see no reason why they would limit this particular monitor.

This is the end

Nevertheless, the U4021QW does not work for me and I have contacted the retailer I bought the monitor from. They have offered to take the monitor back and help me look for a monitor setup that suits my needs. I hope to write a more cheerful post in a week or so. That LG monitor I mentioned in my earlier post seems quite nice…

You May Also Enjoy

I post this to have a good reference (for myself and others) for a minimal Kubernetes manifest that allows service-to-service communication.

If you work full time, in Sweden, you spend about 2 000 hours per year doing your job. That’s a lot of hours, but depending on how you spend those hours the ...

Why developer enablement is a crucial part of DevOps

DevOps is a concoction of ideas which aims to help developers deliver higher quality software at a quicker pace.

At a current client, we are migrating from Azure DevOps to GitHub. The DevOps Team (responsible for promoting and training developers in DevOps) was quick to...